With all of the children working at home, we’re well aware that parents may want additional resources to call upon to entertain them.  We’ll post links to useful websites on here.

This first one comes courtesy of Ian Addison (@ianaddison on Twitter) and is a list of people giving their time to share lessons and activities online.

Here’s a link to a singing focus lead by Gareth Malone – parents have to register an email address but then have access to rehearsals and opportunities to upload singing along the way – it’s a big national focus:
https://decca.com/greatbritishhomechorus/
Also, Carol Vorderman’s website is offering free access to her website content for children age 4 – 11 until school reopen.
https://www.themathsfactor.com/

On Thursday 9 May, Year 2 and 3 took their learning outside the classroom and had a lovely day exploring the coastal features in the sunshine at Lulworth Cove, as part of their geography topic. They enjoyed the scenery and learnt about the different rock types.

Mr Titley commented: “Year 2 and 3 benefitted from what
our great coastline has to offer. Whether it’s pirates, geological
features or sea shells, the Jurassic coast provides plenty of stimulation
for the young, enquiring mind. The children have enjoyed their field
trips: strengthening their understanding of this term’s topics and being out and about with their friends.”

Some pupils commented to Mrs Cross and Mrs Crinion that it was “the best school trip ever!“.

“We loved sketching the arch at Durdle Door!“, Hugo M.

“I was so happy to bring back lots of shells!“, Sarah. 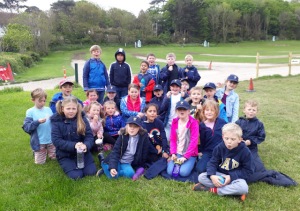 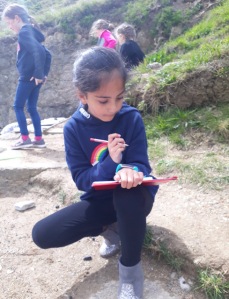 The Pre-Prep department was no place for landlubbers on Thursday 25 April as a band of scurvy seadogs took over! We kicked off our topic this term with a visit from Captain Dan Tastic.  Eagerly exchanging their school sweatshirts for swashbuckling swords, waistcoats and eye patches, our young pupils were held spellbound during the three action packed workshops.   Captain Dan Tastic’s talks were informative and yet hugely entertaining and he employed an impressive variety of props and historical items with which to illustrate the points he was making. From the pirate music playing as they entered to a soaking from a water pistol, via the thud of a cannonball on the floor, the children were enthralled from start to finish – so much so that they were longing for lunch playtime to be over to return to the classroom ‘deck’!

They day was further enhanced by a special picnic lunch which included such pirate delights as starfish shaped fishcakes and pirate cookies.  Many thanks to our chef Nicky and her team for all their hard work in providing this for us.

Zara, in Year 2 rather brilliantly summed up the whole day as she wrote in her thank you letter to Captain Dan; “It was a lovely start to my term.”  Indeed it was.

The children commented: “Captain Dan came and taught us about pirate weapons and we each got a ruby when he left!”.

After an assembly led by Sixth Form pupils on the importance of learning a foreign language, the pupils were divided into groups and took part in 5 different activities led by our Year 8 pupils and some French pupils visiting from Cognac.

They had a French quiz on the weather, practised numbers, months of the year and birthdays, made pet masks for our Carnival and learnt all about the French traditions of “Mardi Gras”.

Our Samba Band accompanied the children to the dining hall where they danced with their masks for our Carnival procession. They then had a French lunch (see menu below) and some crêpes of course!

“I loved playing with the Samba Band for our Carnival procession!” Benjamin.

“I enjoyed learning about the traditions of French Mardi Gras!” Lucy

“Mardi Gras was wonderful, I loved making the masks and learning about the French traditions.” Skyla et Tina

“We loved the food and singing the Robot Song!” Katherine et Alanna

“It was a pleasure playing in the Samba Band!“, Max

“I hope I am in France next year for Mardi Gras!“. Olly 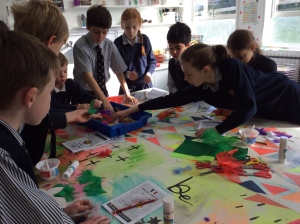 We were lucky enough to have the Visit of the author Maz Evans at our Prep School.

After a wonderful assembly where she talked about her life as an author and how one “yes” can be life changing after years of “no”. Keep trying until you get that “yes”!

Pre-Prep used their imagination to work out what was behind the curtain!

Year 5 and 6 had a brilliant workshop and produced some excellent diary entries. They also asked Maz some great questions.

Maz Evans was inspiring. “We love your books!”

“We thought her assembly was really fun and interesting!”. Year 3

“Maz Evans was a real inspiration and really funny as well!”. Grace M

The pupils in Year 2 have been learning all about The Great Fire of London.

House construction and thatching underway, ready for The Great Fire to arrive…

“We are happy about our great fire of London display. We tried very hard. The flames are above the radiator so they can flicker!”

The topic in Year 2 this term has been Evacuees.  They contacted a former pupil and World War 2 evacuee, Jack Boorne, to ask about his experiences.  The correspondence is here for you to read and enjoy.

“I felt nervous but once I started speaking French I felt confident.”     Rebecca, classe 5.

“I felt happy performing in front of everybody!”    Elizabeth, classe 5.

“It was really nice to see such a range of ages performing.”    Maisie et Barnabé, classe 6.

Year 2 went on a trip to Stonehenge on Monday 12th June.

We looked at some big stones. They looked like Lego bricks because there was a big lump on some of them. We tried to pull the stones on a big trailer but they were too heavy and it would take 100 people to move it. Some of the stone was from Wales. Freddie and Freya thought the trip was amazing. By Freddie and Freya

“On Monday the sixth of March year five and year seven did a French play together. We had been rehearsing it for quite a while, with only having had two full rehearsals on stage together we did really well.  I really enjoyed doing it with the year seven. I would love to do another one.”

“I enjoyed  introducing the year 7 and 5 story of Petit Elephant!” 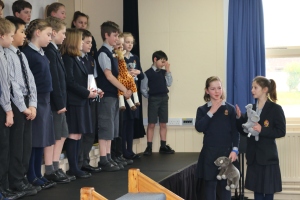