I really hope you don’t mind me writing to you to explain why you should sort me into the house Ravenclaw.

Others must agree that you are the smartest hat I have ever seen or known. The job you do must be SO tiring. You have to sort everyone in Hogwarts into a house that’s why I thought I would help you out. Well done for reaching 1 million followers on insta-hat. I am one of them.

I am absolutely certain you should put me in Ravenclaw because I am very kind because when my sister got her first wand she was just waving it around and ten accidentally hit my younger brother in the face. So I helped him until he felt better. In addition I am very creative because when I found out I was going to Hogwarts I decided that I should practise some spells. So I made a wand out of wood and practised some sells being very careful not to hit someone in the face! I’m sure you know that I am very curious because when a letter stamped with H on it came through my front door my parents took it off me before I could read it. They said they wanted it to be a surprise but when they took it off me the H stamped in red fell off. I searched all over the internet until I found exactly the same one. It turned out to be the letter that said I could come to Hogwarts. I was over the moon.

It’s time to put me in Ravenclaw. If you did I would leap over Hogwarts! So do you want Ravenclaw to be lead to victory by someone that’s kind, considerate and curious? That person is definitely me!

Thank you for taking the time to read my letter.

I am writing to tell you that I want (need) to be in Slytherin. I know that such a cheerful yet still very stern hat such as you would understand. I love your songs because they have so much meaning.

I love the colour green and snakes to. But to become one would be even better.

I have been top of everything and have helped everyone in my class including Jeff Stevens who I LOATH!!! I believe that Slytherin are the best at Quidditch and to play with them would be exuberant and electrically fun as well as fast.

Professor Snape says that I have had higher grades than any of the 7th years have ever had in potions.

My whole family have been in Slytherin and I would be devastated to not be able to follow in their footsteps and be as crafty, creative and cunning as they were.

So would you like the best student that Hogwarts has ever seen to be in Slytherin? I know how much you love Slytherin.

You can make Slytherin the best house it’s just around the corner. I look forward to putting you on at the sorting ceremony.

Of course have herd tales of how wise and wonderful and courage’s you are and how you sort people into houses I mean only a smart Hat could do that. Ok now for the reason

In truth am very adventures and brave because when was lost in the woods I found are foot prints and followed them home like you the smartest Hat  in the whole wide world. And my said you made Albuse Dumbledore the man he is now and he is a man fit for a king like you of course.

And we can work together and soon with you wise mind I will reach the top of the Hats with you the all mighty Sorting Hat so would you like Grifindor to have so many house pointes it’s easy to tell who won the house cup then put me in Grifindor.

Thank you for reading my letter

I hope you don’t mind me writing to you to explain why I should be in the best house, Slytherin.

Everyone who has been to Hogwarts tells me that the house sorting is the most important part of the school year. 97% of people I know say that they find the sorting hat song interesting and intriguing. It gets them excited for the year ahead.

I have been practising my Dark Arts meaning I will be ready to fight when I fulfil my greatest ambition of becoming a Death Eater for Lord Voldemort (I am not even scared of saying his name.). My entire family are one of the last pure blood families In the U.K. I know most families including mine have been in Slytherin since the house was founded by Salazar Slytherin. I am cunning, courageous and clever because, once I gave my cousin a bat bogey hex using my father’s wand then placed a nose biting teacup in my cousin’s place at the breakfast table.

If you put me in Slytherin, I would be with people with the same ambitions and thoughts as me. I am sure no one in Gryffindor wants to become a death Eater. My family would be really proud that I am carrying on the tradition of being in Slytherin.

I have been waiting for the opportunity to be in Slytherin my entire life, ever since the day I was born and would be the happiest person in the world if I was put in the one and only Slytherin.

So would you like Professor Snape to be the happiest man in town? Then put me in Slytherin. I will be proud and loyal to the best hours in Hogwarts. I will help Slytherin win the House Cup and the Quidditch Cup. Slytherin will gain an excellent pupil in me.

Thank you for taking the time to read my letter,

Reception enjoyed some Welsh culture today. Lowri, dressed in traditional clothing, served us with welsh cakes for our snack. We really loved the fruity taste. 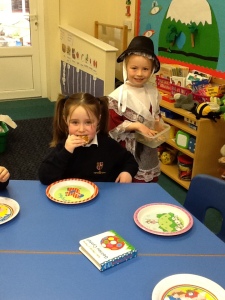 Reception class are learning about space. Today we made pizza planets. We mixed and kneaded, proved and decorated our pizzas with delicious toppings.” How will our pizza change when it is cooked ?” we wondered 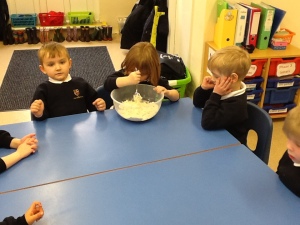 Not really a blog post but we’d love you to watch our new school video, out in time for Christmas.

In Science today Year 4 have been sieving. They have been set a challenge to ‘Clean the Beach’. Ella Kibble from Year 4 says “We have been using sieves and magnets to separate nasty pieces of waste that people have been dropping which have been left on the beach and we are enjoying doing this experiment”

We are all loving our Christmas cactus that has starting blooming in the cold weather we have had. We have a collection of cacti in our classroom that we have been talking about in our Geography lesson as we are learning about deserts. Josh Knight Year 4.

Year 3 have enjoyed their Science experiment, finding out whether plants need their leaves in order to grow.  Interesting results from the children, with many scientific observations.

Joe and Emma spent Open Morning demonstrating how to create stop-motion animation.  Here are the results of their hard work.