The Pre-Prep department was no place for landlubbers on Thursday 25 April as a band of scurvy seadogs took over! We kicked off our topic this term with a visit from Captain Dan Tastic.  Eagerly exchanging their school sweatshirts for swashbuckling swords, waistcoats and eye patches, our young pupils were held spellbound during the three action packed workshops.   Captain Dan Tastic’s talks were informative and yet hugely entertaining and he employed an impressive variety of props and historical items with which to illustrate the points he was making. From the pirate music playing as they entered to a soaking from a water pistol, via the thud of a cannonball on the floor, the children were enthralled from start to finish – so much so that they were longing for lunch playtime to be over to return to the classroom ‘deck’!

They day was further enhanced by a special picnic lunch which included such pirate delights as starfish shaped fishcakes and pirate cookies.  Many thanks to our chef Nicky and her team for all their hard work in providing this for us.

Zara, in Year 2 rather brilliantly summed up the whole day as she wrote in her thank you letter to Captain Dan; “It was a lovely start to my term.”  Indeed it was.

The children commented: “Captain Dan came and taught us about pirate weapons and we each got a ruby when he left!”. 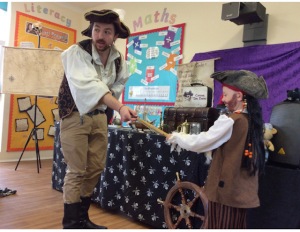 8 thoughts on “Ahoy Me Hearties!”